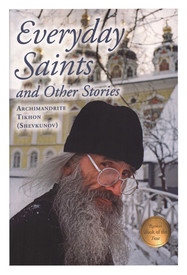 More than a million copies and several million electronic versions ol this book were purchased in less than a year after its release. Everyday Saints is the English translation of the work that has soared at the top of the bestseller lists in Russia since its publication in late 2011. Winner of several national awards including «Book of the Year», its readership spans philosophical boundaries. Surpassing all competition many times over, it was voted the most popular book in Russia for 2012.

Open this book and you will discover a wondrous, enigmatic, remarkably beautiful yet absolutely real world. Peer into the mysterious Russian soul, where happiness reigns no matter what life may bring. Page upon page of thanks, praise, and testimonies to the life-changing effect of these bright, good-hearted, and poignant tales have flooded the Russian media. This book has been the cause of many sleepless but happy nights: «I couldn’t put it down — was sorry when it ended» is the common reaction.

The book is being translated into ten different languages. This English translation, Everyday Saints, is every bit as charming as the original.